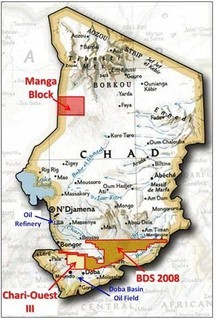 HOUSTON, July 18, 2012 – ERHC Energy Inc. (OTCBB: ERHE), a publicly traded American company with oil and gas assets in Sub-Saharan Africa, today announced that the Government of the Republic of Chad has issued an Exclusive Exploration Authorization (EEA) to ERHC in respect to the three blocks covered by ERHC’s Production Sharing Contract (PSC) in Chad. The EEA, issued in accordance with the PSC, authorizes ERHC to undertake oil and gas exploration operations in the Chari-Ouest III, BDS 2008 and Manga Blocks in Chad, which are covered by the PSC.

The initial term of the EEA is for five years and can be renewed for a further three years.

“With the issuance of the EEA, ERHC can now commence its Chad exploration work program in earnest,” said ERHC’s President and CEO Peter Ntephe. “ERHC’s goal is to advance quickly toward the identification of leads and prospects and thereafter to drill as quickly as the circumstances permit.”

ERHC plans to focus its work program initially on the BDS 2008 and Chari Ouest III Blocks in Southern Chad. ERHC has 100 percent of the interest in BDS 2008 and a 100 percent interest in half of Chari-Ouest III. ERHC’s holdings in the two Blocks encompass 20,860 square kilometers or 5.155 million acres. Both Blocks are located on the north flank of the Doba/Doseo basin, where Esso and other operators have made discoveries exceeding 1.29 billion barrels of oil equivalent.

The regional geology of Chari-Ouest III and BDS 2008 Blocks is dominated by the Pan African Shear Zone and associated rift basins. Esso and partners have been active in exploration and development projects in the area for decades.

“Our analysis of gravity, magnetic and 2D seismic data shows that ERHC’s Chari-Ouest III and BDS 2008 Blocks fall within the prolific Doba/Doseo Basin,” said ERHC’s Geoscientist and Technical Advisor Martin Wensrich. “Our main area of focus extends 260 kilometers and is on trend and east of the 2011 Benoy-1 discovery by OPIC and north of discoveries by Esso.”

The OPIC Benoy-1 well drilled a low side fault closure and test flowed oil at a calculated rate of over 2,000 barrels per day from lower Cretaceous fluvial/deltaic sands. Esso’s Tega #1 encountered hydrocarbon reserves with an estimated potential of 8 million barrels of oil equivalent (MMBOE) in the Lower Cretaceous “C” sand. The Esso Maku #1 drilled a Lower Cretaceous faulted structure and encountered hydrocarbons with an estimated potential of 21 MMBOE.

“Our preliminary projections, based on the technical assessments made by the operator of an adjacent block, suggest the likelihood of at least three prospects with a reasonable chance of success on ERHC’s blocks,” said Mr. Wensrich. “Significant work will of course have to be done to identify the prospects and drill them but if our preliminary projections hold, we think that the combined mean potential may be up to 63 MMBOE and the upside exceeding 332 MMBOE.”

Apart from its holdings in Chad, ERHC recently signed a PSC with the Government of the Republic of Kenya on Block 11A in northwestern Kenya. The Company also holds working interests in six Blocks in the Nigeria-São Tomé & Príncipe Joint Development Zone (JDZ) as well as 100 percent of Blocks 4 and 11 of the São Tomé & Príncipe Exclusive Economic Zone (EEZ) with an option to acquire up to 15 percent working interests in two other EEZ Blocks.

About ERHC Energy
ERHC Energy Inc. is a Houston-based independent oil and gas company focused on growth through high impact exploration in Africa and the development of undeveloped and marginal oil and gas fields. ERHC is committed to creating and delivering significant value for its shareholders, investors and employees, and to sustainable and profitable growth through risk balanced smart exploration, cost efficient development and high margin production. For more information, visit www.erhc.com.

Cautionary Statement
This press release contains statements concerning ERHC Energy Inc.’s future operating milestones, future drilling operations, the planned exploration and appraisal program, future prospects, future investment opportunities and financing plans, future shareholders’ meetings as well as other matters that are not historical facts or information.  Such statements are inherently subject to a variety of risks, assumptions and uncertainties that could cause actual results to differ materially from those anticipated, projected, expressed or implied.  A discussion of the risk factors that could impact these areas and the Company’s overall business and financial performance can be found in the Company’s reports and other filings with the Securities and Exchange Commission. These factors include, among others, those relating to the Company’s ability to exploit its commercial interests in Kenya, Chad, the JDZ and the Exclusive Economic Zone of São Tomé and Príncipe, general economic and business conditions, changes in foreign and domestic oil and gas exploration and production activity, competition, changes in foreign, political, social and economic conditions, regulatory initiatives and compliance with governmental regulations and various other matters, many of which are beyond the Company’s control. Given these concerns, investors and analysts should not place undue reliance on these statements. Each of the above statements speaks only as of the date of this press release. The Company expressly disclaims any obligation or undertaking to release publicly any updates or revisions to any forward-looking statement to reflect any change in the Company’s expectations with regard thereto or any change in events, conditions or circumstances on which any of the above statements is based.

Cautionary Note to U.S. Investors – The United States Securities and Exchange Commission permits oil and gas companies, in their filings with the SEC, to disclose only proved reserves that a company has demonstrated by actual production or conclusive formation tests to be economically and legally producible under existing economic and operating conditions. We use certain terms on this Web site, such as "recoverable reserves potential," that the SEC's guidelines generally prohibit us from including in filings with the SEC. U.S. Investors are urged to consider closely the disclosure in our Form 10-K. You may review our filing with the SEC at the following Web site: www.sec.gov/cgi-bin/browse-edgar?action=getcompany&CIK=0000799235.