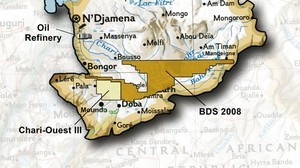 HOUSTON, December 2, 2013 – ERHC Energy Inc. (OTCQB: ERHE), a publicly traded American company with oil and gas assets in Sub-Saharan Africa, today announced that its wholly owned subsidiary, ERHC Energy Chad Ltd., has submitted its completed Environmental Impact Assessment (EIA) of Block BDS 2008 to the government of the Republic of Chad. Once review of the EIA is completed and approved, ERHC can advance to the next step in its oil and gas exploration work program: an aero gravity/magnetic survey of BDS 2008. The Company anticipates sending Invitations to Tender for this survey early in 2014.

ERHC has 100 percent of the interest in BDS 2008 in southern Chad, which encompasses 41,800 square km., equal to more than 10 million acres. The Block stretches from Chad’s western border with Cameroon to the Eastern border with Central African Republic.

“With an exploration Block as big and spread out as BDS 2008, it is essential that we use this proven and cost effective method of mapping geological/structural features,” said Gertjan van Mechelen, ERHC’s exploration manager. “We have identified two main areas of focus. One is north of Esso’s Tega and Maku discoveries in the Doseo basin and the other is east of and on trend with OPIC’s Benoy-1 margin discovery in the Doba basin. We expect the aeromagnetic survey to help identify the most highly prospective areas.”

Based on its current understanding of the data, ERHC estimates the un-risked resource potential in the two focus areas to be as much as 250 million barrels of oil equivalent (MMBOE).

The Block is located on the north edge of the Doba and Doseo basin, where Esso and other operators have been active in exploration and development projects for decades and have made discoveries exceeding 1,290 MMBOE. The regional geology of BDS 2008 is dominated by the Pan African Shear Zone and associated rift basins.

In addition to its holdings in Chad, ERHC has concluded a farm-in agreement for Block 11A in northwestern Kenya with a renowned integrated oil and gas company, which is pending approval from the Government of the Republic of Kenya. The Company also holds 100 percent of Blocks 4 and 11 of the São Tomé & Príncipe Exclusive Economic Zone (EEZ) as well as working interests in six Blocks in the Nigeria-São Tomé & Príncipe Joint Development Zone (JDZ).