Rights in the Republic of Kenya

ERHC has interests in Block 11A in the Republic of Kenya. The Block encompasses 11,950.06 square kilometers or 2.95 million acres and is is in the vicinity of Block 10BB in which significant oil discoveries have recently been announced. The Block is situated on Kenya’s border with South Sudan to the north, Block 11B and Lake Turkana to the east and near Kenya’s border with Uganda to the west.

ERHC holds a 35 percent interest in Block 11A after farming out a 55 percent stake to CEPSA Kenya Limited (a wholly owned affiliate of Compañía Española de Petróleos, S.A.U. (CEPSA)). The Block is northwest of the significant Ekales-1, Agete-1, Etuko-1, Ngamia-1 and Twiga South-1 oil discoveries.

In August 2014, ERHC announced the successful completion of a major 2D seismic acquisition program of Block 11A. BGP acquired seismic data over approximately 1,000 line kilometers on behalf of ERHC and its operating partner, CEPSA. The seismic survey, paired with the structural mapping of prospective basins from a Full Tensor Gravity Gradiometry (FTG) survey completed earlier in 2014, helped to identify the Tarach-1 prospect as the drilling location for the first exploration well. The Tarach-1 prospect is situated in the central part of the basin. It is a three-way structural closure trapping against a North - South trending normal fault. The mean estimate of oil prospective resources for the prospect is 65 million barrels. The exploratory well is expected to spud in March 2016.

In April 2015, ERHC announced that the exploration team identified 13 drillable prospects and leads in the Tarach basin. Mean prospective resources of all prospects and leads totals 645 million barrels. The basin stratigraphy is believed to be Tertiary/Cretaceous age, which would be similar to the Lokichar basin 200 km to the southeast of Block 11A, where significant discoveries have been made. The Lokichar basin has over 600 million barrels of 2C contingent resources.

Rights in the Republic of Chad 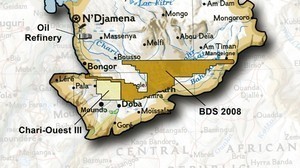 ERHC has has 100 percent of the interest in Block BDS 2008 in the Republic of Chad. A Production Sharing Contract was signed in July 2011. BDS 2008 is situated next to the Doba Basin oilfield, which in 2010 had an average daily production of 122,500 barrels of crude oil per day. The Manga block is north of Lake Chad, along the border with Niger.

The West African nation of Chad is one of sub-Saharan Africa’s significant crude oil producers. It share borders with Nigeria, Cameroun and Sudan, which all produce oil as well. According to the World Fact Book, a consortium led by two U.S. companies has been investing $3.7 billion to develop oil reserves - estimated at 1 billion barrels - in southern Chad. 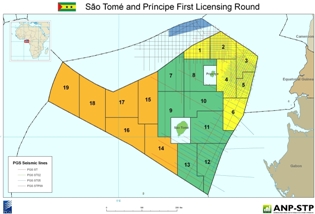 In October 2015, ERHC and Kosmos Energy reached agreement to transfer all ERHC's rights to Block 11 to Kosmos. ERHC retains 100 percent of the rights to EEZ Block 4 as well as the option to take up to a 15 percent working interest in each of two other unlicensed EEZ blocks of its choice. ERHC and the ANP-STP have agreed in principle to terms of a PSC for Block 4.

Rights in the Joint Development Zone 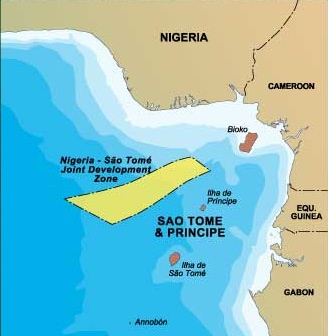 The JDZ was established during the spring of 2001 to govern the disputed boundary area between Sao Tome and Principe and Nigeria for commercial exploitation. The JDZ is administered by a Joint Development Authority (JDA) which oversees all future exploration and development activities in the JDZ.

In June 2005, ERHC accepted awards by the JDA for Blocks 2, 3, 4, 5 and 6. The awards were subject to the execution of a mutually acceptable production sharing contract and joint operating agreement for each Block.

The foundation for those awards was established in April 2003, when ERHC and the Democratic Republic of Sao Tome & Principe entered into an Option Agreement in which ERHC relinquished certain financial interests in the JDZ in exchange for exploration rights in the same area.  The rest of the claimed territorial waters of Sao Tome and Principe is known as the Exclusive Economic Zone (EEZ).
ERHC Energy’s decision reflected the company’s consistent approach to growth and expansion through high impact exploration and development of oil and gas fields in the potentially lucrative and undeveloped oil fields in the Gulf of Guinea.

ERHC Energy has entered into relationships with other oil and gas companies that have the technical and financial resources to work in deep water. These strategic relationships are designed to assist ERHC in realizing the full value of its assets in the JDZ.

Cautionary Note to U.S. Investors - The United States Securities and Exchange Commission permits oil and gas companies, in their filings with the SEC, to disclose only proved reserves that a company has demonstrated by actual production or conclusive formation tests to be economically and legally producible under existing economic and operating conditions. We use certain terms on this Web site, such as "recoverable reserves potential," that the SEC's guidelines generally prohibit us from including in filings with the SEC. U.S. Investors are urged to consider closely the disclosure in our Form 10-K. You may review our filing with the SEC here.