We are posting the report below with permission.

RHC Energy Inc. (OTCBB: ERHE) announced the company was awarded three oil blocks for exploration and development from the Republic of Chad. A production sharing contact (PSC) is expected as early as next week.
The specific blocks in the award are Block BDS 2008, Manga and Chari-Ouest Block 3.  The West African nation of Chad is one of sub-Saharan Africa's significant crude oil producers.  ERHC reported Chad has proven oil reserves of 1.5 billion barrels with studies establishing the prospect of more discoveries.
Click here for the news release.
OAG360 Comments
We view this as a positive step for ERHC as the new blocks in Chad strategically and geographically diversify the company's historical Gulf of Guinea-focused portfolio while maintaining the company's focus in Africa. With the addition of exploration blocks in Chad, OAG360 would expect ERHC to pursue an operating partner once the PSC is finalized, if one is not already identified, consistent with the company's approach to its offshore West African exploration plays.  According to BP's 2010 World Energy Report, Chad produced approximately 122,000 BOPD during 2010, an increase of 3.5% from production during 2009. 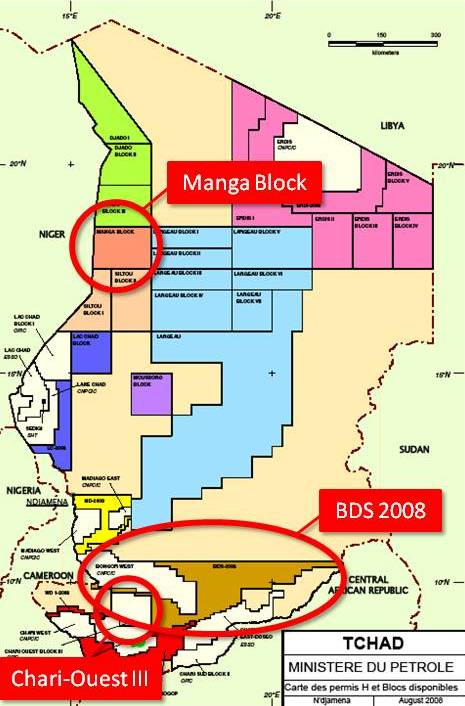 ERHC's Pursuit of Oil in Chad: Through stable leadership from Chadian President Idriss Itno Deby, Chad has recently undergone infrastructure initiatives to seek economic and social development in hopes of utilizing the countries resources. China National Petroleum Corp (CNPC) and Chad have jointly built a new oil refinery near Ndjamena, the capital of Chad. Chinese news sources are reporting China is willing to further expand trade and cooperation in infrastructure building in the country, consistent with China's overall strategic approach in Africa, particularly with respect to securing resource access.
OAG360 notes another Chinese integrated major, Sinopec, is the operator of the three Joint Development Zone blocks offshore Sao Tome & Principe in which ERHC Energy has significant working interests. ERHC's experience in the JDZ with Sinopec suggests the company should be able to explore potential operator relationships for their new acreage in Chad because they've successfully established such relationships for their offshore blocks in the JDZ.  Whether this is the company's strategy and who any potential operational partners in Chad may be will be something for investors to watch over the coming months.
ERHC management will host a live online chat at 5:00 p.m. Central Time Wednesday, July 6, 2011. Click here for the transcript.
Gulf of Guinea Update on Joint Development Zone (JDZ): ERHC Energy has historically had two primary operating areas offshore West Africa in the Gulf of Guinea– Blocks 2, 3, 4, 5, 6 and 9 of the Joint Development Zone (JDZ) and Blocks 4 and 11 of the São Tomé and Principé Exclusive Economic Zone (EEZ).
The company has discovered gas shows on Blocks 2, 3, and 4 of the JDZ and has been in process of evaluating data with its operating partner, Sinopec, in order to decide to move forward with Exploration Phase 2. The Joint Development Authority (JDA), the bi-national Nigerian-Sao Tomean administrative body with oversight authority over the JDZ, approved an extension of Exploration Phase 1 in JDZ Blocks 3 and 4 until March 14, 2012, subject to final approval by the Nigeria-São Tomé & Príncipe Joint Ministerial Council. The company was awarded a 12-month extension for Phase 1 on Block 2 of the JDZ in May 2011.  The approval indicates concurrence between the JDA and operating companies, including ERHC, that drilling results to date in the JDZ indicate additional exploration work should be conducted to further delineate prospective resources in these large offshore blocks.
Time is on ERHC's Side: The extension on the three blocks is positive news for the company as it allows the JDZ partners to fully evaluate the scope, potential, and comprehensiveness of the three blocks before moving forward in the exploration process. Blocks 2, 3 and 4 of the JDZ cover a combined 547,327 acres. ERHC and partners have only explored a small portion of the vast acreage the JDZ block covers.
Sinopec, following its acquisition of Addax Petroleum in 2009, operates three of the four JDZ blocks with ERHC, and maintains a working interest in a fourth JDZ block, operated by Total.  Total entered the JDZ play in the autumn of 2010.  ERHC has working interests in six of the nine JDZ blocks, three of which are under development with Sinopec.  Perhaps the most compelling aspect of the JDZ story for ERHC is the fact the company is 100% carried by Sinopec to first production.
Click here for previous Oil & Gas 360®write-ups on ERHC.
Important disclosures: The information provided herein is believed to be reliable; however, EnerCom, Inc. makes no representation or warranty as to its completeness or accuracy. EnerCom's conclusions are based upon information gathered from sources deemed to be reliable. This note is not intended as an offer or solicitation for the purchase or sale of any security or financial instrument of any company mentioned in this note. This note was prepared for general circulation and does not provide investment recommendations specific to individual investors. All readers of the note must make their own investment decisions based upon their specific investment objectives and financial situation utilizing their own financial advisors as they deem necessary. Investors should consider a company's entire financial and operational structure in making any investment decisions. Past performance of any company discussed in this note should not be taken as an indication or guarantee of future results. EnerCom is a multi-disciplined management consulting services firm that regularly intends to seek business, or currently may be undertaking business, with companies covered on Oil & Gas 360®, and thereby seeks to receive compensation from these companies for its services. In addition, EnerCom, or its principals or employees, may have an economic interest in any of these companies. As a result, readers of EnerCom's Oil & Gas 360® should be aware that the firm may have a conflict of interest that could affect the objectivity of this note. The company or companies covered in this note did not review the note prior to publication.