Opportunity to farm into attractive, highly prospective and underexplored acreage, including blocks adjacent to the prolific and currently producing Doba Basin Oil Fields. 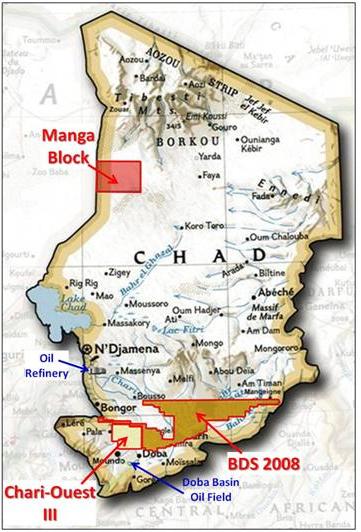 ERHC Energy Inc is offering interested parties the opportunity to obtain substantial equity in its Chari-Ouest III, BDS 2008 and Manga Blocks in Chad

ERHC Energy Inc (ERHC) is a Houston-based independent oil and gas company, incorporated in Colorado, USA, with a market capitalisation of ~$105 mm (August 2011). ERHC is focused on growth through high impact exploration in Africa and the development of undeveloped and marginal oil and gas fields.

EHRC has a wealth of African experience, with a management and board connected with the region, significant investment by African business interests, assets elsewhere in the continent and a track record of getting things done.

The Republic of Chad is a significant oil producer in sub-Saharan Africa, with proven oil reserves of 1.5 BBO, undeveloped discoveries of 2.6 BBO and 14.6 TCF gas, along with substantial untapped exploration potential. Chad shares borders with Nigeria and Libya, Africa’s largest oil and gas producers, along with Cameroon and Sudan, which also produce oil. Oil production in Chad started in 2003, with current production at 122,500 BOPD.

PSC commitments comprise seismic acquisition, G&G studies and at least one well within a five-year exploration term (renewable for a further three years). ERHC has developed an initial five-year exploration work program (currently pending regulatory approval) which, depending on the results of seismic acquisition and G&G studies, might include the drilling of a first well within three years. The Chari-Ouest III and BDS 2008 blocks are located close to the proven hydrocarbon bearing Doba and Doseo Basins, two such rift basins lying along the Central African Shear Zone.

The Chari-Ouest III block is expected to be the initial focus of the work program due to OPIC’s Benoy-1 discovery in the south of the block and its proximity to the Doba Basin oil fields (current production 122,500 BOPD). Subsequent focus is expected to move to BDS 2008. Both blocks contain aspects of the Doba and Doseo basin geology.

ERHC’s intention is to initially complement the available data with gravity/magnetic and seep studies, followed by 2D seismic acquisition and reprocessing. 3D acquisition will be undertaken once leads/prospects have been identified.

Chad has benefited from over $3.7 billion of international investment in its hydrocarbon industry, including a 20,000 BOPD capacity refinery in N’djamena. Current oil production is exported via a 30 inch, 1,070 km long, ExxonMobil operated pipeline to the Port of Kribi in the Gulf of Guinea. The pipeline has a capacity of 225,000 BOPD (expandable to 600,000 BOPD) and a current utilisation of 120,000 BOPD.

ERHC is offering interested parties the opportunity to acquire (as operator or non-operator) substantial equity in, and join in the exploration of, these attractive Blocks situated in an exciting area of high prospectivity. Companies interested in the opportunity should contact EHRC at the address shown below. Upon signing a Confidentiality Agreement, further information will be made available via an online data room.