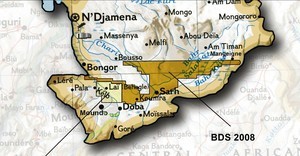 HOUSTON, April 28, 2014 – ERHC Energy Inc. (OTCBB: ERHE), a publicly traded American company with oil and gas assets in Sub-Saharan Africa, today announced that it has now received the arrêté (decree) of the President of Chad giving presidential seal of approval to the Company's retention of oil exploration Block BDS 2008 and its voluntary relinquishment of the Manga and Chari-Ouest III Blocks. ERHC had earlier announced the agreement of the Ministry of Mines, Energy and Oil to ERHC's request for relinquishment. The request was made to enable the Company to focus its resources on the highly prospective Block BDS 2008.

The ratified documents of approval are posted to the Company’s website here and here.

With the receipt of the Presidential Order clearing the path for ERHC to proceed with exploration activities in BDS 2008, the Company has commenced – in advance of a potential farm-out – the financing of approved geological and geophysical work. ERHC is currently issuing a series of convertible notes to fund magnetic/gravity surveys and, thereafter, 2D seismic acquisition.

Modeling for gravity/magnetic surveys of BDS 2008 was completed recently and constitutes the basis for ERHC's request for bids from reputable survey companies for the requisite surveys.  ERHC's plan is to gather data from an area of 5,000 square kilometers, with two main areas of focus:

- North of Esso's Tega and Maku discoveries in the Doseo basin; and

- East of and on trend with OPIC's Benoy-1 margin discovery in the Doba basin.

ERHC has 100 percent of the interest in BDS 2008 in southern Chad, which encompasses 41,800 square km. or more than 10 million acres. The Block is located on the northern edge of the Doba and Doseo basin, the site of active exploration and development projects with discoveries exceeding 1,290 MMBOE. Based on its current understanding of available data, ERHC estimates the un-risked resource potential in the two focus areas in BDS 2008 to be 250 million barrels of oil equivalent (MMBOE).